A downloadable game for Windows

This project was built simply as a test for what a future Superhero game like Superman might be like in a large scale modern city running on UE5. I dream of a modern Superman game and with the release of UE5, seemed like fertile ground for some experimentation with the amazing packages Epic has made available.

This game uses Epic's The Matrix Awaken's Project City and replaces the character with a flying superhero variant of my own design using other marketplace assets.
This was a quick thrown together test, there could be any number of issues and problems, but I am putting it out there for anyone who is keen to give it a go. Also, for legal reasons, this character isn't Superman and I have made sure this is totally free.

Please note that this is an incredibly heavy game and lower end PC's will struggle potentially. Even on a 3090 I have run into streaming issues...
Again, this is based on Epic's Matrix Demo, just for fun, and I haven't done any kind of optimisation myself, it's just plug and play.

Either way this is just for those of us who one day dream of a Superman open world game, I hope this scratches that itch a little bit for now.

And no, I am not currently working on this in any major compacity further, again, just for fun and I have other commitments, but may consider revisiting in the future.

Shout out to Alec Shea for helping me with some SFX work, check him out
Itch: https://slaleky.itch.io/ Twitter: twitter.com/slaleky Music Links: bio.to/AlecShea

I have found another web where  wanna adding multiplayer and put the game to steam… I don’t know if only take the idea or make as the other thief… but I read that will be at steam too and have a roadmap….

Yo, I wanted to let you know one dev to another it looks like someone is trying to flip your work on Steam. I already reported it, hopefully enough others do so also to get it removed quickly.  https://store.steampowered.com/app/2181490/Heroes_City_Superman_Edition/

Thanks for letting me know, I have reported it too, hopefully Steam sorts it ASAP!

A week later and it's still available on Steam... I've also sent a report just now.

it still available for now....

People on Steam general forums, are claiming you must have not provided any proof that the scammers stole your work, saying Valve is not doing anything wrong at all by allowing this scam to continue.

What exactly did you provide to Valve? Did you go through their DMCA claim site?

the demo run, but no have the FX sound that your video have, so I can move but … my flat without sound isn’t as good as your video😅. Are there  something for fix the sound?Thx

Where is the exe file. LOL Like how is this Demo uploaded? Dont tell me its in 10 different files???

can we get a black suit version without the cape and underwear...the cape clipping does break the impressiveness a bit, although I know this is an experimental project, m just having too much fun with it, hence thought of putting a request, nonetheless thanks for making this, loving every second of it

Upload it on Telegram by splitting in ZIP and share Telegram Link insted of mediafire. It will be more easy and fast to download aswell.

My dodge isnt working somebody help

Hi, can you make some linux version, or some code/bp/whatever to be able to port it to linux?
I have 0 knowledge of UE5.

how do i unistall it

You can simply delete the folder, there is nothing to uninstall. 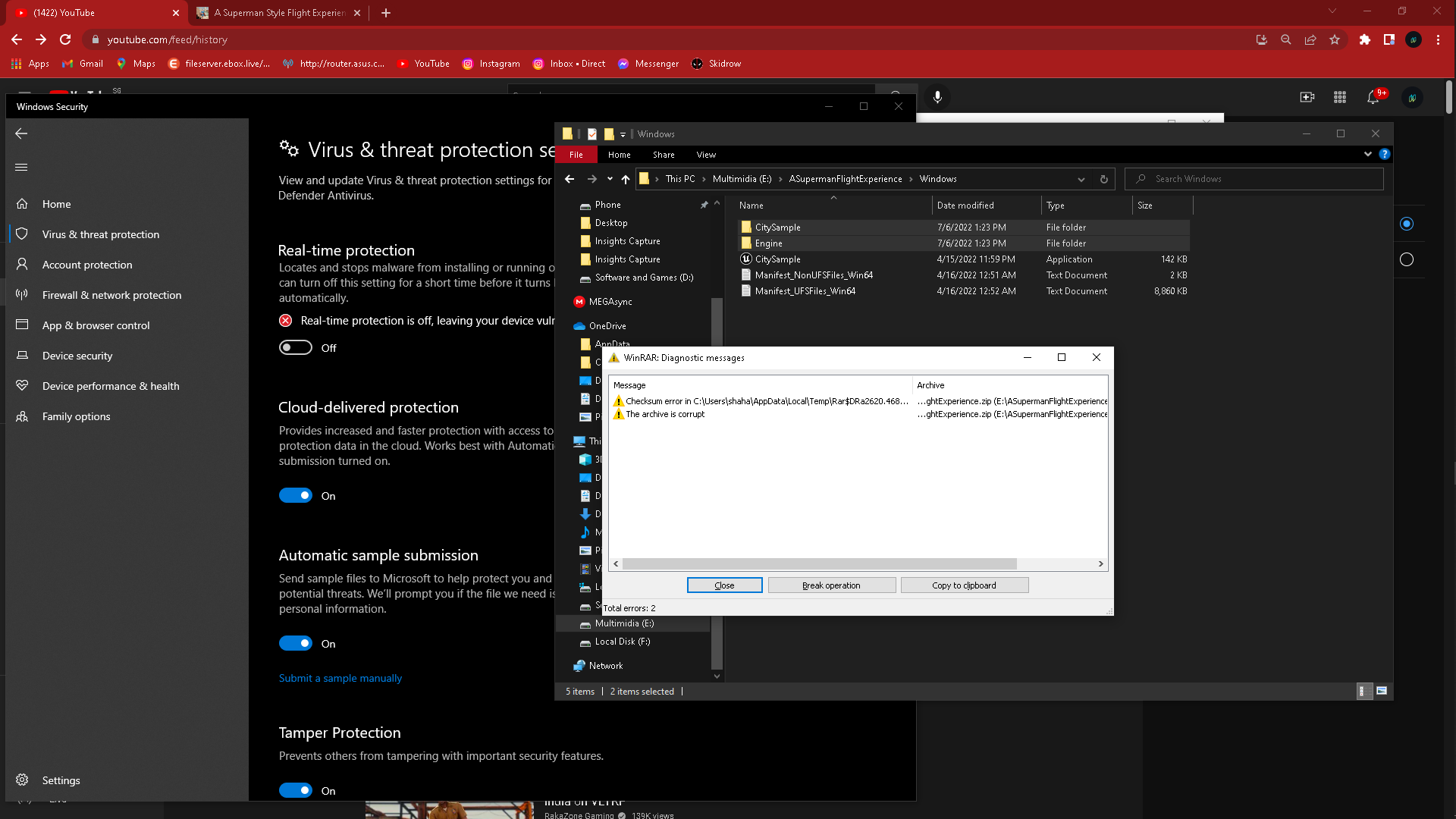 Try extracting it with 7-Zip. If you still have problem, your download might be incomplete or corrupted.

[EDIT] I just noticed that your antivirus is turned off in your screenshot, you don't need to do that for the extraction to work. 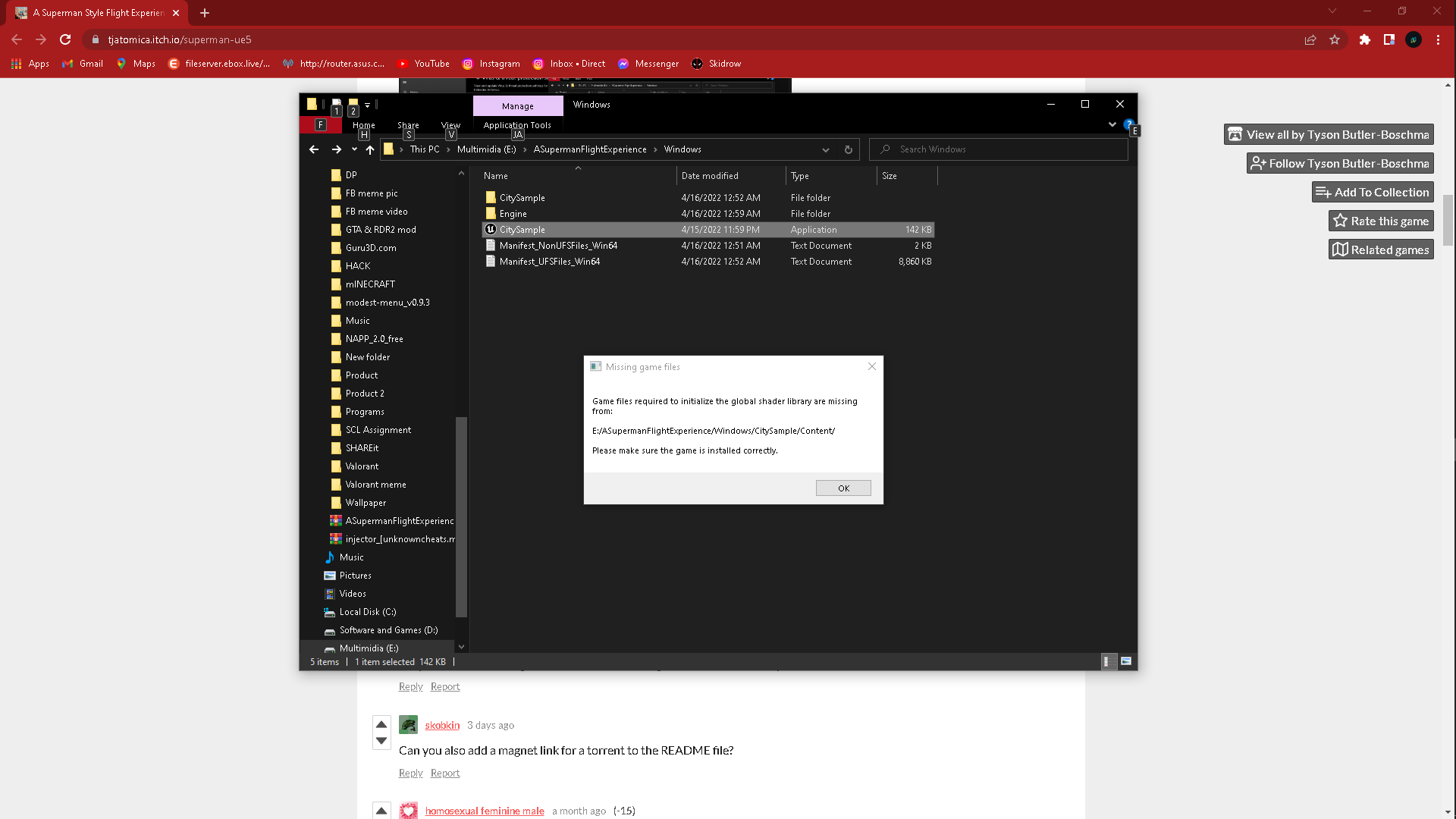 My folder "ASupermanFlightExperience\Windows\CitySample\Content" contain 2 folders. A folder "Splash" with only one image file inside for a size of 2 880 138 bytes. A folder "Paks" with 5 files for a size of 19 000 321 230 bytes. Are you sure you have all the files and that they are of the correct size ? 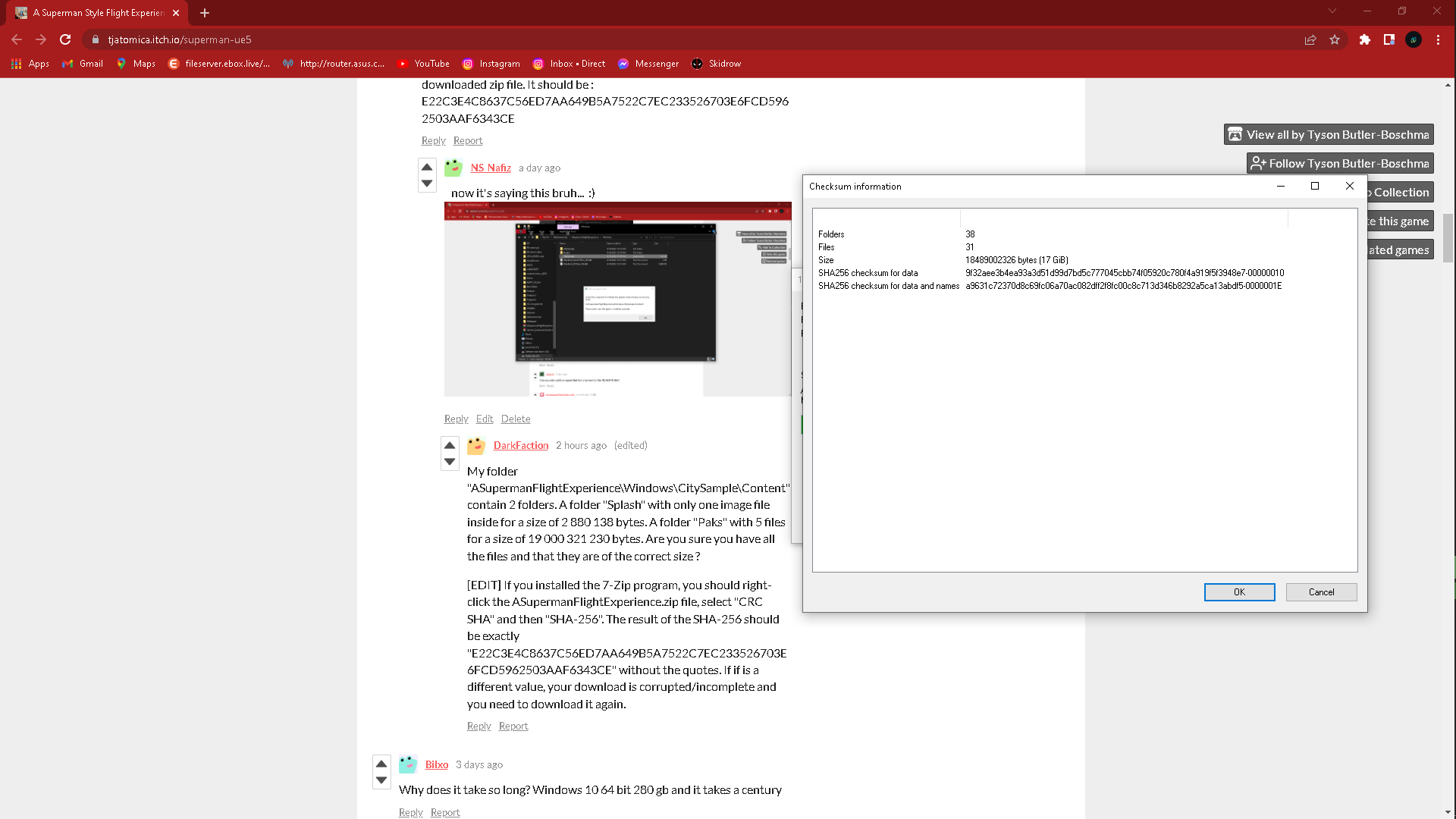 You did your SHA-256 on the extracted folder, the one i provided is for the ASupermanFlightExperience.zip file downloaded directly from the link in the text file. The values would not be the same even if it was not corrupted.

However, I see in your screenshot that the size of your folder is too small. So downloading it again will probably fix the problem. Make sure you compare the SHA-256 after you finish redownloading the zip file by doing it on the zip file itself. It should be identical to mine.

Do you have a decent graphics card and enough memory? My demo works good with an   i7.

Can you also add a magnet link for a torrent to the README file?

That's stupid and nobody care's

i can't tell if you're being sarcastic or not

Literally every single one of your comments ask for homosexual feminine males or sissy males in games. wtaf

uh, (question) how do you launch the game downloaded it but there is no launch button pls fix this.

how do i unistall it

It is not a program that is installed. You can delete the ASupermanFlightExperience folder if you want to free up some space.

Thanks for that. Wish someone did this more often. :]

Noob question - How do you launch the game? I downloaded it, but there's no "open the game" button in the directory

BTW this dude is stealing your work and sells it as his own work.
he also deletes every comment mentioning your site
(his video got already 850.000 views)

To be fair, the whole city is part of the Unreal Engine City Sample. The creator of this superman game work consisted mostly of the coding of superman and compiling the game. The other creator you have shown did a different superman with a different model and different animation. It is the same concept but I doubt he stole anything.

This "Superman UE5" is only 3 Unreal Engine assets from the marketplace.

It's a 5 minute mesh swap and drop the character in the level amount of work that even my grandmother can do with minimal UE4/5 knowledge. He's not stealing this guy's work because there is no "work" to be stolen. Don't assume things you don't know.

In fact, SHEOL from the video you linked seems to have done even more work on their project because there's a FPP camera mode and a sonic boom midflight and the locomotion animations are from Hammerhead whose Flight Animations are arguably better than Indie-us' IMO... and in a later video, heat vision and vehicle destruction.

Grandmas are pretty adept nowadays so that's not very surprising.

I am amazed how many are saying it won't run, it has to be because of slow drives or poor GPUs.  As I said it runs great on my Dell XPS Tower which only has an i7 and GTX 1080 and 32 GB RAM.  I just set up a Corsair Vengeance with an i9 and RTX 3080 Ti, can't wait to try this on this new rig.

my brother in christ people would love to have your setup

I tried it and it is very cool! I think I will enjoy this more than I would have if it was the original Matrix demo. Has anyone figured out how to change the time of day or the speed at which it cycle (if it does) ?

see the readme file, it countais the link to the download

Mechanics are great. I've read that Warner Bros will not continue the Batman Arkham franchise and will make a new Superman game instead. but the game has not been released for a long time. I think you can complete this game before them and make a great superman game. The game will be more awesome after adding some story and enemies. please keep improving this game. maybe Warner Bros can see your efforts. And he can offer you to work in his own game studio.

im not waiting 15 HOURS to download a demo game, hope the game launchs on steam cause i got no sanity at all to wait all day for that shit

yeah for some reason any game via google takes so long to download, but games on steam takes less a minute, thats why i hope they launch it on steam

i cant find it, whats the name of it?

Downloading now. This is gonna be awesome. Was just playing Superman Returns on OG Xbox because outside of the game being trash, its really the only way to fly around decent as supes. Yours looks way better so heres to hoping it runs good on my laptop lol. Will report back after.

Wow. Runs great for me. This is so fun. Matrix city surprisingly runs same as optimized city for me. Every now and then a fast hiccup but smooth nonetheless.

It's a very ambitious game. However I can't give this anything over 1 out of 10.

It stalls my game to an unplayable hault, making this seem more like a 'drunk-superman' simulator, than an actual demo, let alone a game with a concept in the works. Unless you have a better way to increase fps, the audience for the game is going to be miniscule.

It's not really you, it's the Unreal Engine 5 as it is, it just commands a gpu that not everybody has, and we can't expect everybody to own a good pc to run the game. My pc is very good and still couldn't run it, even the videos showing the gameplay demo I can tell they're fps took a crucifying.

With that being said, I wish I could run the game as it looks very impressive visually.

Your PC might be good what parts are in your rig?  Also Why give a it a 1 out of 10 review???  He said this would be a niche audience and that most PC rigs won't be able to play this properly. So instead of leaving not so positive feedback just move along this most likely isn't for your PC even my 1080ti would struggle a lot with this but my 3090ti can handle it.

"Please note that this is an incredibly heavy game and lower end PC's will struggle potentially. Even on a 3090 I have run into streaming issues...   Again, this is based on Epic's Matrix Demo, just for fun, and I haven't done any kind of optimisation myself, it's just plug and play.

Either way this is just for those of us who one day dream of a Superman open world game, I hope this scratches that itch a little bit for now."

If anyone wants to recreate this exact demo on their own you can put together these 3 marketplace assets:

The superhero flight animations are really really good and even includes the blueprints for the flying movement character controller!

wouldn't wipe my dick with this tbqh

when i start the game it opens up a folder and i have no clue what to do.

Read the ReadMe, it will give you instructions...

You mentioned marketplace assets. For the landing VFX, did you use the Superhero Flight Animations pack? I have been looking for some similar effects for non-superhero abilities but didn't purchase because the pack was mostly about the animations and called out the effects were fairly simple. However, they look great in this game if thats what you used.

Hmm I could use this for my ape.

was idea made by superman returns? well that was great game i hope u will search it on and add some elements from that game 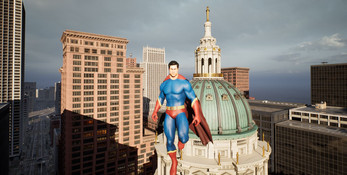 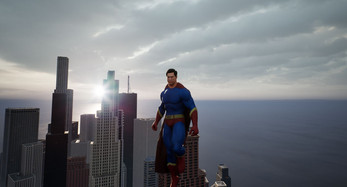 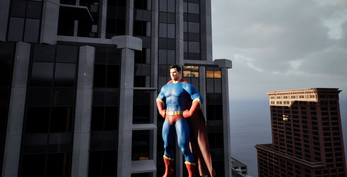